Get me outta here!

The background of this blog is the GPU Technology Conference’16 Amsterdam keynote by nVIDIA CEO Jen-Hsun Huang. Extremely eloquent, very knowledgeable, articulate and passionate – all great ingredients for a memorable keynote and you won’t be disappointed. He keeps the energy up for 2 hours – no curtains, no diversions, a feat on it’s own ! (P.S: I have heard from other folks that JH’s whiteboard talks are exponentially more informative and eloquent).

Popping the stack back to the main feature, the goal of this blog is to address a very thin slice of the talk – the AI backbone for a scalable infrastructure beyond the lab experiments. I had talked with many folks and the topic of a scalable AI pipeline/infrastructure gets lost in the hyperbole discussions on Artificial Intelligence and the rest …

First let us take a quick detour and put down some thoughts on an AI Backbone in four visualizations, nothing less-nothing more …. 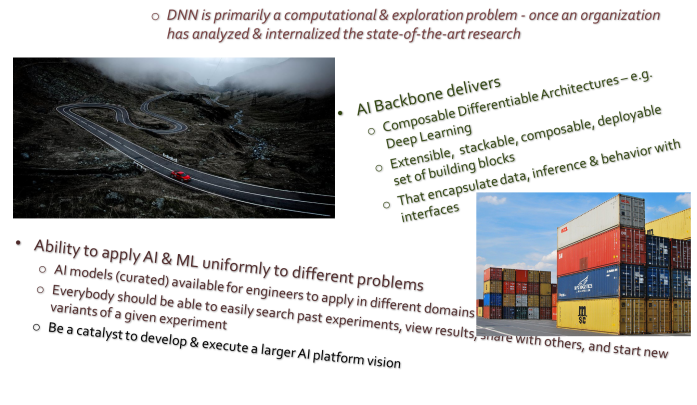 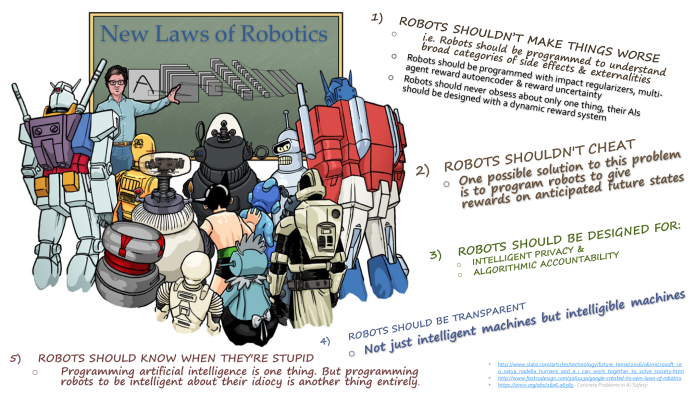 With this background, let us take a look at the relevant slides slides from Jen-Hsun Huang’s eloquent GTC’16 Keynote at Amsterdam.

I. Computing is evolving from a CPU model to a GPU Model

There is a new computing model – the GPU Computing pipeline with four components:

P.S: BTW, I like the view from the camera on the top right corner of the podium ! The slides have an elegant 3-D look !

Interesting domain, with a future.

“… something really big is around the corner … a brand new revolution, what people call the AI revolution, the beginning of the fourth industrial revolution … “

As you can see I really liked the keynote. Digressing, another informative & energetic presenter is Mobileye’s CTO/Chairman Prof. Amnon Shashua. I usually take time to listen and take notes.

Autonomous cars do bring out interesting nuances to the normal things that we take for granted and don’t think twice about !

“Bridges are really hard,… and there are like 500 bridges in Pittsburgh.”

Of course, it is the infinite (or near infinite) context that we, humans can process and machines aren’t even close … But, one would think bridges would be easier – no distractions, well designed straight roads; of course with the current GPS accuracy, the car might think that it is in the water and start rolling out it’s fins !!

“You have a lot of infrastructure on the bridge above the level of the car that we as humans take into account, … But when you sense those things with a sensor that doesn’t have the domain knowledge that we do … you could imagine that the girders coming up from the side of the bridge and that kind of thing would be disturbing or possibly confusing.”

Pittsburgh does have bridges, lots of them … There is even a BBC documentary! Even how the city deals with the bridges is interesting.

In fact Pittsburgh is called “The City of Bridges”, even though some have different interpretations (we will come to that discussion in a minute)

While we are on the subject, I do have a couple of books for the Uber Car to read ! It can even order them through it’s robotic friend Alexa ! or drive to wherever fine books are sold, on it’s own time – Uber might not pay for the impromptu solo drive.

Now, to SLAM, it is the set of algorithms collectively called Simultaneous Localization And Mapping – a very interesting topic by itself.

In short, a SLAM system needs known points in addition to unknown points, to reason about & figure out it’s trajectory – bridges have less of known points it can rely on …

We can definitely employ Deep Learning ConvNets as well as traditional computer vision with a dash of contextualization is a good start … that is a topic for another time (sooner than later…). Probably an interesting opportunity for bridges.ai or openbridges.org

For those snappy Machine Learning experts, there is even a Pittsburgh Bridges Data Set at UCI, to start with ! Probably nowhere near the data needed to train modern Convolutional Nets, but one can augment the images with algorithms like Flip, Jitter, Random Crop and Scale et al.

If we think Pittsburgh is difficult, wait until Uber starts autonomous driving in Amsterdam ! While Pittsburgh has 446 bridges, many sources put Amsterdam with over 1000 bridges that cars can travel. There are many bicycle and pedestrian bridges in Amsterdam that an Uber car wouldn’t be interested in – except, of course, to pick up the tired pedestrians ;o). The which-city-has-max-number-of-bridges discussions can be followed here:

Unfortunately it takes extreme repercussions for us to feel in our bones, the limitations of our technologies.

Lesson 1 : Our machines inherit our faults (so far …)

As I pointed out in one of my AI blogs:

Lesson 2 : Many domains are not forgiving to byzantine failures

We are learning that painful lesson whether they are rockets, airplanes or cars. Even though we freak out of snapchat is down for an hour, we can survive that, but not these. The drivers need to understand the downside of technologies and be alert.

Lesson 3 : Mission Critical Systems should have redundancy, over coverage & independency

For example multiple sensor sources & probably independent situational interpretation. I saw the following from somewhere where the Japanese Ministry talks about “correcting the wrong train of thoughts”:

Lesson 5 : This might lead to some level of Standardization & Legalization

I am spending this weekend with Yann LeCun (virtually, of course) studying the excellent video Lectures and slides at the College de France. A set of 8 lectures by Yann LeCun (BTW pronounced as LuCaan) and 6 guest lectures. The translator does an excellent job – especially as it involves technical terms and concepts !

(I will post a few essential slides for each video …) 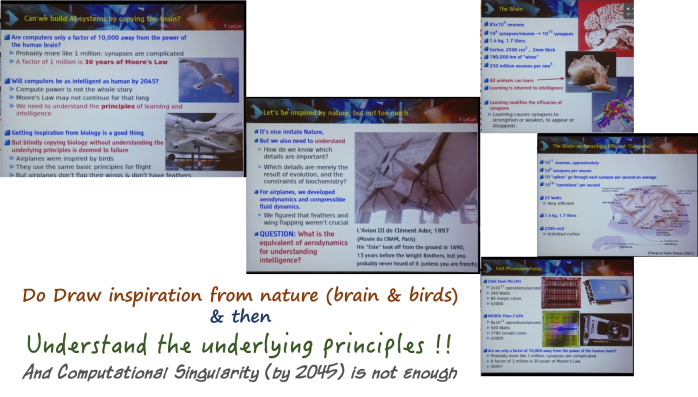 The reasoning, attention,episodic memory and  a rational behavior based on a value system are my focus for autonomous vehicles (cars & drones!)

Probably the most important slides of the entire talk – the future of AI.

Parse it couple of times, it is loaded with things that we should pay attention to … 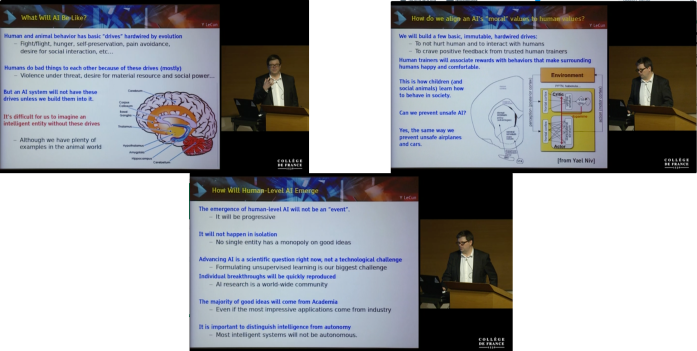 I agree here, here, here and here – we don’t want AI to imitate us, but take us to higher levels !

Stay tuned for rest of the video summaries …..

It is always interesting to hear from Jeff and understand what he is upto. I have blogged about his earlier talks at XLDB and at Stanford. Jeff Dean’s Keynote at RecSys2014 was no exception. The talk was interesting, the Q&A was stimulating and the links to papers … now we have more work ! – I have a reading list at the end.

Of course, you should watch it (YouTube Link) and go thru his keynote slides at the ACM Conference on Information and Knowledge Managment. Highlights of his talk, from my notes … 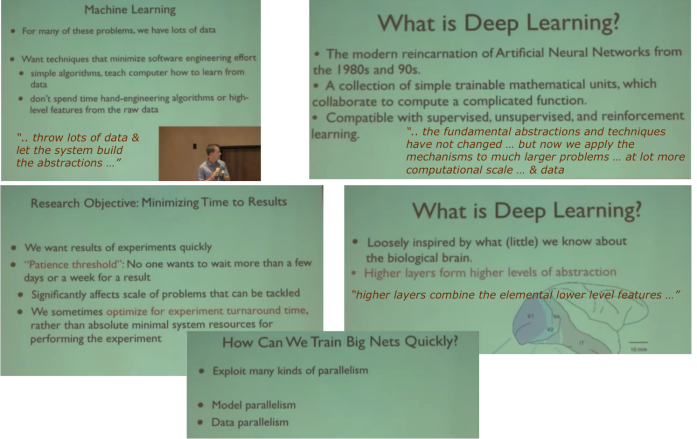 Interesting concept of embedding similar things such that they are nearby in a high dimensional space! 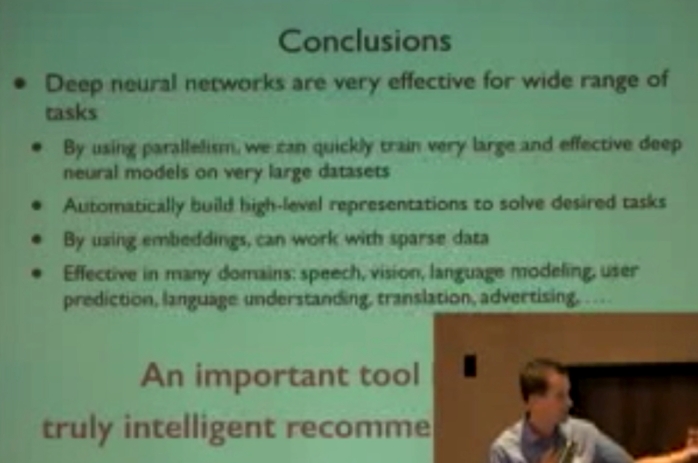 The talk was cut off after ~45 minutes. Am hoping they would publish the rest and the slides. Will add pointers when they are on-line. Drop me a note if you catch them …

Context : I couldn’t attend the RecSys 2014; luckily they have the sessions on YouTube. Plan to watch, take notes & blog the highlights; Recommendation Systems are one of my interest areas. 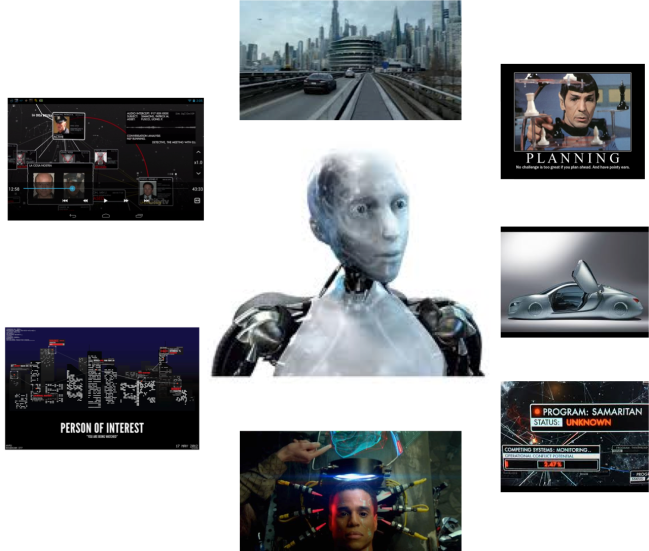 May be it is that Contemporary AI is actually just NI !

We would rather interact with them via Google Glass – a two-way, highly interactive medium that act as a sensor array as well as augment cognition with a digital overlay over the real world

Of course, deterministic transactional systems have their important place – we don’t want a probabilistic bank balance!

Point #2 : We don’t even want our machines to be like us

Point #3 : Now we are able to separate Interface from Inference & Intelligence 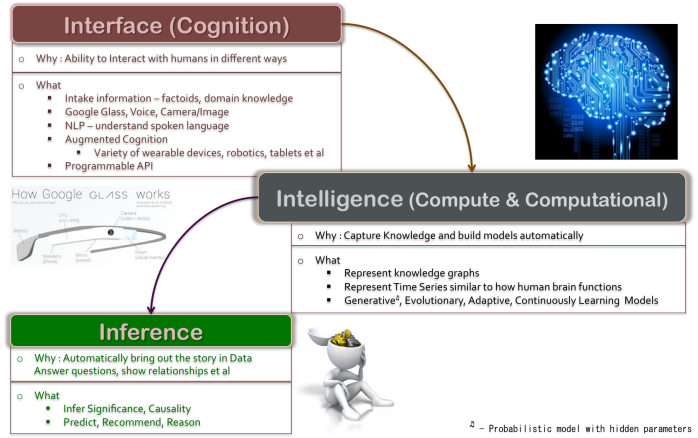 Taking this line of thought to it’s extreme, one can argue that Google (Search) itself is the case and point of an ostentatious and elaborate infrastructure for what it does … no intelligence whatsoever – Artificial or Natural ! It should have been based on knowledge graph rather than a referral graph. Of course, in a few years, they would have made huge progress, no doubt.

Human Interface is not Human Intelligence, same with machines. They need not look like us, walk like us, or even talk like us. They just need to augment us where we are not strong … with the right interface, of course

Well said Gary. Humans & Machines should learn from the other and complement … not mimic each other … And there is nothing Artificial about it …

I really wish we take “Artificial” out of AI – Just incorporate what we are learning about ourselves into our computers & leave it at that !

Back to the main feature …

An interesting blog in GigaOm by Derrick Harris on Deep Learning for the masses. What interested me most was Jeremy Howard from Kaggle. 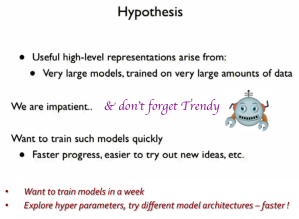 I also think the broader architecture of the three amigos viz Interface,Inference & Intelligence needs to come together